My dog sweater with a twist! 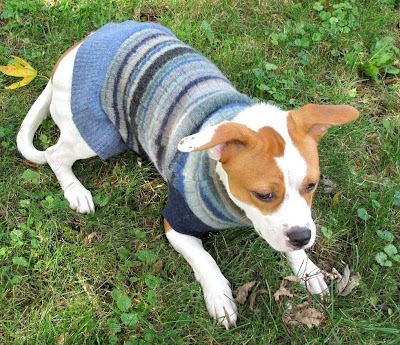 When my dog sweater tutorial was blogged about over at Create and Delegate, it reminded me that winter is on it's way, and that Spots needed a warmer sweater. I picked this fun striped thick wool from my stash, but realized that she would look like a boy with all that blue. We can't have that ;) ! I decided to add a skirt to it. Basically I did the same thing as the original tutorial, except I took a band of wool and added it to the edge. Just cut your band bigger than the edge of the sweater, and stretch the sweater edge as you go. 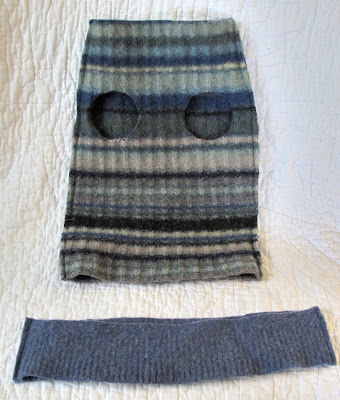 That will give you a "skirt" added on to your sweater! 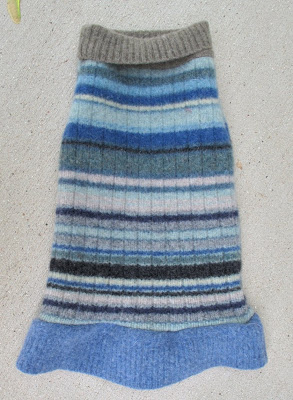 Please forgive me though, for the sizing on Spots's sweater... I never checked the original pattern before making this, and realized (a bit too late) that she had grown a little (which is really emphasized in the last picture!) since we adopted her. I'll have to make another now that fits her better, but you get the general idea! 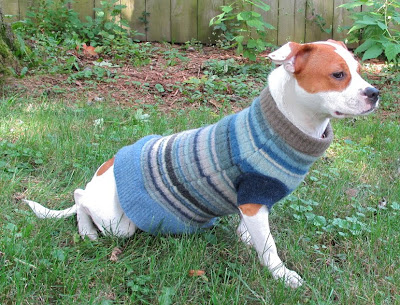 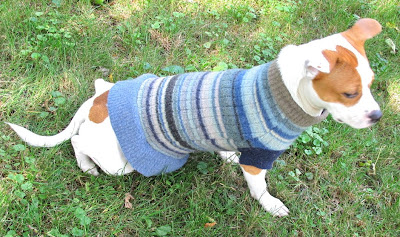 Posted by Resweater at 4:00 AM

That is one cute sweater and also one cute dog!

So cute. I have a greyhound who needs sweaters but it never, for some reason, occurred to me to try making a recycled sweater for her. I'm going to think about that now. The pattern would have to be a bit different because her legs are long and awkward.

We adopted a small terrier mix last week from the local shelter. The first day we had her it was beautiful. The second day it snowed and was really cold. I dug a felted sweater out of our stash and made her a very quick sweater that buttoned up the back. I think this might have to be our next diy sweater for her.

Your blog article is really very informative and beneficial as user point of view. Thanks for sharing this and please keep sharing.

Thank you so much. This was very helpful. God bless you.