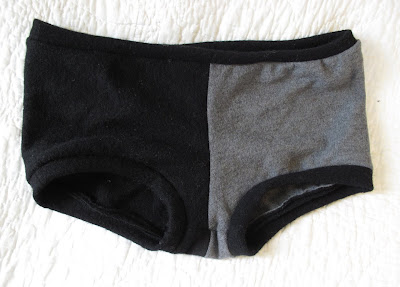 I am sure some of you are shaking your heads & saying "yep... Kris has finally lost it!", but I made wool underwear! I wanted these mostly for running, since you need your underwear to be made of a moisture wicking material, but they can be worn any time.

Take your pattern and cut out 2 pieces, making sure to add 1/2" on each side, for seam allowance, and because your regular underwear material will most likey be slightly stretchier than the wool is. You should end up with 2 pieces that look like this: 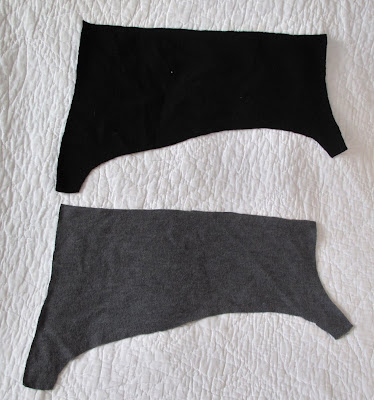 Now sew the ends together, wrong sides out. 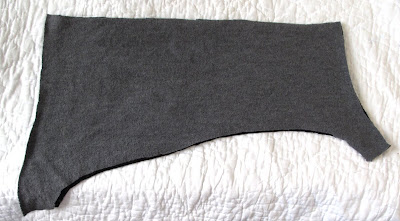 Now turn it, so the seams are down the center & sew the bottom pieces (the crotch) together. 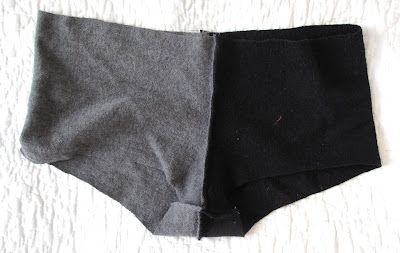 Now to make the waist band, cut 2 piece of wool that are a little shorter than the underwear (you may want to measure your waist & take it down a couple of inches to account for the stretch). Your waistband will end up being less half the width of your pieces, so make sure they are wide enough. In hindsight, I could have used a little more waistband on mine, but they are fine as is too.

Sew the ends of your pieces together, wrong sides out.

Now you will take this & fold the width in half, seams in, right side out & sew this to the waist of your underwear. Your underwear should have seams out still, and you will be sewing the waist band to the inside of the underwear. Since the waistband is a little smaller, you will need to be stretching it as you go. When you are done, and flip them right side out, they should look like this: 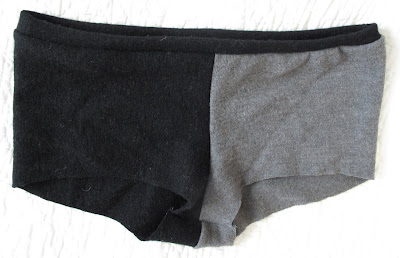 Now flip them back wrong side out, and repeat the waist band process on the legs (only smaller, obviously). When you are done with that, they will look like they are done, but you have one more step, adding a panel to cover the crotch seams. 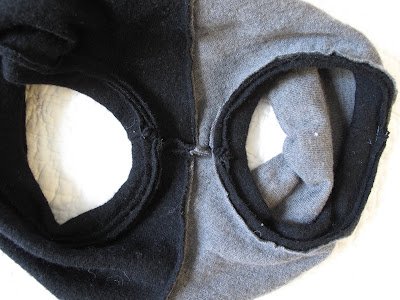 Just cut a small piece to the shape of the crotch, and sew it to the seams on either side. 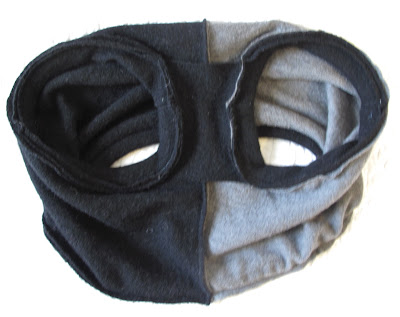 Now you are done!

I took mine for a test run last night (went jogging in them). The only con to wearing these that I found, is that they are slightly more bulky at the seams than regular underwear, so where they are fine under jeans, I had definite panty lines under my tighter fitting jogging pants. I think i'll work up a pattern for a more "boy short" style, using the original seams, and that should eliminate than problem. The pros? There is no sweat smell on my wool underwear (or even on the synthetic jogging pants I wore over them), that is usually on my clothes after I run (I can't believe I am telling you all this!), there was no unpleasant dampness from sweat while I ran, I was the perfect temp (neither hot or cold) in that region while I ran, and they are really cute looking! Of course these can be worn for everyday underwear too. I would imagine these would be fantastic for any mom that has to sit in cold bleachers!
Posted by Resweater at 4:00 AM

Cute! What I did that took care of the line problem was to use the bottom ribbing of a sweater that fit comfortably snug around my waist as the top part of where I cut out the pattern-and did not sew it- then I did not sew around the legs either, they are nice just as they are.Still a little bulkier than cotton, but warm!! Love the two-tone. :]

Great ideas! I wanted to use the sweater ribbing for the waist, but didn't have any for this pair (used it on a prior project), but plan to on the next pair!

Instead of seams, try butting the edges up against each other and sew with a zigzag stitch that catches both pieces. This is very sturdy on felted wool and lies flat. I'm not sure if I want to wear wool unders, but you always amaze me with your creative use of the material. :D

Hi Kris! I'm passing the Stylish Blogger Award to you! You can go to my blog and read about it there. Play along if you want to. I just became a follower to your blog. I found you while searching "fulling". Happy day to you, Annie

Molly, great idea! Wool is perfect for underwear, unless it's hot outside, but even then it should be comfortable, since wool is moisture wicking & insulated.

annielizabeth, thanks so much for the award!

Kris, I love that you posted this today. I looked on your blog the other day to see if you had done underwear in a previous post. I have high tech quick dry outerwear, but always feel soggy anyway after a workout because of the underwear factor. I ended up making a merino pair on my own. They are too big so I am going to try again. I will use your tutorial and suggestions found here. I was feeling a bit cooky about the whole idea of homemade wool undies. Glad I am not alone.

I think this is a brilliant use for felted wool, and - as outerwear - how cute would a pair of longer boy cuts be over tights to go with a matching miniskirt?

I thought about doing wool underwear for my hubby, since he is cold all the time. He's a tall, skinny guy, and he likes to wear the cotton underwear that have a more of a "shorts" leg on them, longer in the leg than these briefs. I just wondered if heat rash would be an issue in the nether area with wool. I have lots of wool from my sheep and I figure it would be nice to have some nice underwear and socks for him.

Snowballs, It would actually be the opposite. Wool wicks away moisture, and is naturally insulated, so he won't get a heat rash.

Try merino wool socks... In Texas heat they keep feet cooler and dryer than cotton for sure. I want to make my own undies because I suffer from lymphedema and can't find any in wool that fit. I'm a newbie to sewing though. Can anyone help with my questions? I found merino wool Jersey and another with spandex which though not all natural would give me extra stretch for bad swelling days. Or should I get the one recommended for making bra pads for nursing moms? And which is best to make hubby drawers?