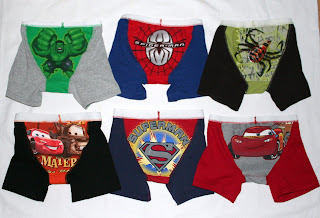 Today's tutorial is originally for making boxer briefs for boys out of t-shirts, but you can also use the pattern to make boxer-style wool soakers! Today's tutorial comes to us from Nancy's Couture blog (thanks, Nancy!), an awesome blog for anyone that sews! For the tutorial & pattern for the t-shirt boxer briefs, head on over here. Thanks, Nancy!!

Now if you are using this pattern to make wool soakers, I recommend going a size up from what they would wear in the underwear in all the measurements except the leg width. I also made the waistbands from sweater ribbing, instead of elastic. What's nice about these is you can make 2 of crotch & rear end pieces to make a doubled up soaker area. I did 2 layers, and after I sewed each crotch seam, I faced them in, so there was no uncomfortable crotch seam on the inside of the soaker (did that make sense?). I did make a mistake though, and forgot to use the hem of the sweater for the bottoms of the legs on the first pair, but since it is felted, it doesn't look bad. I think they came out really cute, and look a lot less "diaper cover" than regular soakers for your bigger kiddos that just need a night time solution. 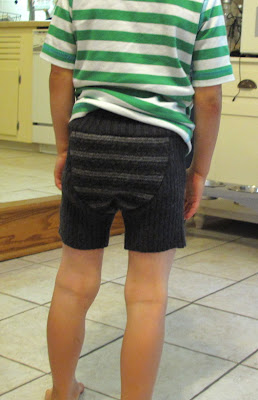 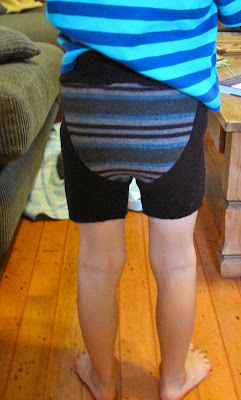 Posted by Resweater at 6:00 AM

So cute-- both the t-shirt version and the wooly one! Very clever!

I haven't tried the t-shirt ones yet, but I plan to. Nancy's tutorial is so clever!

These are super cute! And I like the idea of making them out of wool as a nighttime solution. My 3 yr. old is 90% dry at night, but I still keep him in training unders for when he has an accident. If I made some of these, he could wear normal cotton unders and then these as his pajama bottoms! :)

That's what I do. My son has cloth pullups at night & wears wool over them. I like this style a lot for the older boys.

How cute! We have so much t-shirt scraps to use up aroundhere.... to bad my son is not interested at all in using the potty! I'll have to file this one away and make them someday though!

I need to make my son a couple wool covers. He is potty trained for day, but wets the bed every night.