It's What I've Been Working on Wednesday & a sweater story

I have been cleaning & organizing this week, so sewing has been on the back burner, but I did manage to squeeze in a quick pair of longies for my son. Half of his "woolly pants" are getting too small, and won't fit him next year, so I made another pair. These have rolled cuffs, and a fold over rise, so they should fit him for at least another year or 2. Can you tell we love stripes around here? :) 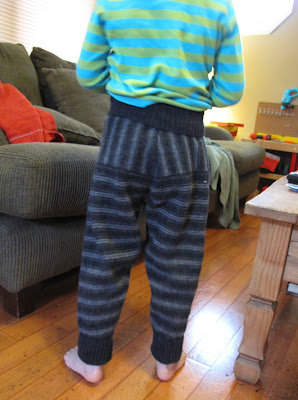 Another thing I have been working on is finding the original owner of this sweater! 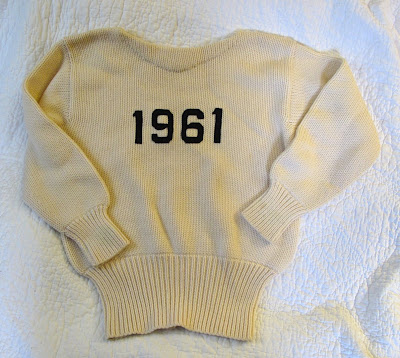 This is a wool sweater that was typically worn by high school football players in the 1960's. I purchased it at a garage sale last summer, and couldn't bring myself to list it in my shop. I ran across it the other day & looked it over. There was a name tag sewn above the maker's tag, and the maker's tag had a city & state on it. Out of curiosity, I Googled the man's name, and the city/state. This man's name popped up in a 1961 alumni list! I then Googled only his name to see how common it was, to see if it was a coincidence, and there only seems to be 2 people in the U.S. by that name (or at least that are Google-able). If it belonged to the man on the alumni list, his class will be having their 50th reunion in May! I thought it would be so cool to reunite this man with his sweater, if he wants it, so I contacted the alumni office, and they are trying to contact him. Wouldn't it be so fun if he wanted it? Maybe he could wear it to his reunion! I'll keep you posted, if I hear back from them.
Posted by Resweater at 2:51 PM

Love this story. Sadly, it's the same kind of side tracked that I get when I'm trying to keep on task.
Please let us know how it turns out. Maybe he'd like it made into a pillow?

If he doesn't want it, I may offer it to the school, if they have a display case to put it in or something. I remember my HS having that sort of thing, with trophies, etc.

That's so cool! It's awesome that you are trying to find him. Good luck!

That's awesome!
I'm in a similar boat with a WWII foot locker - it's got the name and address on it, and I'd love to find out the story of the previous owner.

What a wonderful story for this sweater! It would be great to reunite him with it. Definitely keep us posted.

That's a great story. I hope the fellow and sweater are reunited. I just wish I had all of my wool sweaters from high school and college. I was a clothes horse and wore wool sweaters everyday to school during the cold months. They were all the really heavy thick kind.

I hope I hear something soon. I will definitely keep you all posted!

Tony, This is a really thick sweater too. It would be hard to get cold wearing that! Do you know if there is a term for this type of sweater?

This is totally off topic, but what kind of sewing machine do you have? Likes/dislikes if you've used others? I keep getting frustrated, and don't know if it's my machine or (most likely) user error...wondering if there's something out there that's great for wool ;)

I have 2 sewing machines... an antique Singer Featherweight, and a new Baby Lock BL9. I adore my Featherweight, but because of it's lack of features, and slowness from age of motor, I do most sewing now on the Baby Lock. I love/hate the thing, lol. I never had a learning curve with the Singer, but this thing with eat my projects, and i'll have no idea what I did wrong. I may be getting a new, new machine. Maybe i'll do a post on this, and see what the consensus is.