I use every part of the sweaters I craft with, even the dryer lint! I have been saving the wool dryer lint to put in a suet holder for the birds to make nests with in the spring (i've seen that in a few places online, so I don't know who to give the credit too for that brilliant idea!). I can't think of a better material to use... wool is insulating, biodegradable, and natural. Since I use all natural detergents that rinse out well, and wool dryer balls, there are no chemicals in my lint either. 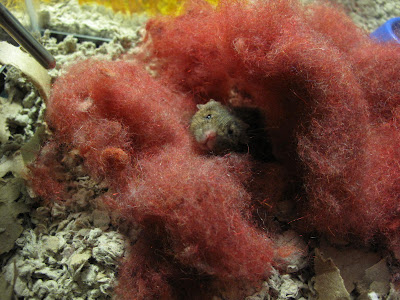 Now for the part where you either "awww" or "ewww"... depending on whether you view mice as cuties or vermin. My son's mouse, Jackhammer, has developed allergies to something & has been scratching herself until she bleeds. I have been trying to figure out what she's allergic to, and she's on meds to try to stop the itching (yes. I took her to the vet). This morning I remembered that wool is hypoallergetic, and put in a handful of wool dryer lint. Jackhammer immediately made herself a nest with it, and I don't see her scratching while she's in it. I'm sure it could be coincidence, but hopefully this will help the poor thing. I couldn't get a non-blurry picture of her... didn't want to use the flash & freak her out, and she wouldn't stop wiggling her nose, but isn't she cute? :)

I like the name Jackhammer - must be a rescue hero fan at your house!

I couldn't figure out how to reply to your request as I couldn't find an e-mail but I would be honored if you blogged about my sweater bunting or any of my sweater projects for that matter.

And i can't believe you took a mouse to the vet...

Jackhammer was actually just named after one of Jack's favorite tools :)

Fantastic! I will blog them tomorrow... Thanks!

I know, but I couldn't watch her suffer like that. I've actually become attached to the little thing.

Sorry to ask, but I dryer lint (could not find it in my dictionary) would be the scrap parts of wool you take out of your dryer, I imagine??? Actually, I really like the idea of saving it for the birds to build their nests in spring... Actually, my ex-boyfriend used to take the "leftover hair" out of his hairbrush/comb and let it fly down the balcony (living in a village, not a city) for the birds to take- and I did the same when I was with him (some people might find that ewwww as well, but I think it´s just fine for the birds to repurpose for nesting...;-)Plus, I like the idea you took the little one to the vet- hope it feels better soon!
Viola.

I save my wool dryer lint too and use it as stuffing in my turtles :)

Viola, Yes dryer lint is the fluffy stuff you take out of your dryer.

i luv your blog and your fun ideas. If you run across anymore bright striped sweaters Im interested!!:)