Everyone's got cabin fever around here, so i'll let you in on something that has entertained my son for hours on end. I went to a play farm years ago with my son and out of the pony rides, carousel, train, hay rides, and animals, he liked the corn table best, time after time. The lightbulb went off and I made him his own. He was under 2 when I made it, and he's played with it just about daily since, and he is now 4 1/2. Every child (and some adults!) that comes to my house is drawn to the corn table.
To make it, I chose an under the bed storage container, but you can use just about anything that's long and shallow... a sand/water table, or even an old drawer. Mine has a lid, which my friends with corn eating babies like ;) I also added dried beans at some point for a different texture, and Jack likes to separate them out, then mix them back in. Whenever he seems to stop playing with it, we just switch out the toys in it, and it's new again! Sand toys work best, and buckets & scoops are a must. Some people like to make sensory tables with rice, but rice is harder to pick up, and I would be unable to clean it. When the corn gets dusty (or hairy, like it did when we had our dog), I just held a sand sifter over the corn & held the vacuum attachment up to it. The question I got the most, especially when he was younger, was "how do you keep him from throwing the corn all over?". I told him if he threw the corn he couldn't play with the corn table. He threw the corn twice, and both times he got removed from room with the corn table for 5 minute (pure torture, lol!). He never threw the corn again because he wanted to keep playing. 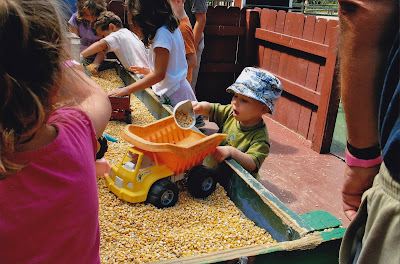 Great idea! I would have loved this when my guys were young.

I am totally going to do this. Talia loves these things.

be careful having corn in an open container around the house. Rodents love corn =) A plastic container able to be covered when not in use would be best!

i LOVE this! we need something exciting to play with around here. any hints on where to get the corn (most economically)? how much did it take to fill the box?

great idea! i have been using flour, noodles, and rice... very messy. i think i am going to have to switch to corn & beans!

B, I'm not too worried about rodents. We haven't seen a single mouse, or evidence of one, since we moved in 7 years ago. If we had rodents, I wouldn't be leaving them out a big feed dish like this ;) It does sit on top of a large plastic Rubbermaid tote normally, that a mouse wouldn't be able to scale anyway. I just had it sitting on the couch to get a decent picture of it.

Christa, I forget how much corn it was, but it cost $10 for the corn at a local feed store. I'm sure I could have gotten it even cheaper, had I drove out of town to the real farms. You can probably find beans in bulk pretty cheaply at a bulk food store too.

Colleen, Corn & beans is much less messy than flour & rice! Have fun!

I recognize kimmikcrochet"s blanket on your sofa. I love her blankets, hope she lists more soon, her shop is empty right now. This is a great idea, my grand daughters would have a lot of fun with it. Love your blog, too!

This is a great idea, thanks for sharing! I love that it's corn too. I always thought that the bird seed and rice were so small they would be hard to clean up.

I am storing this one away mentally for future years and (hopefully) grandchildren! Marvellous!