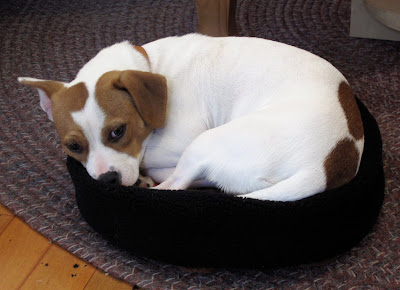 I know, i'm breaking my blog schedule again, lol. A new dog needs a new bed, so I set to work yesterday. I apologize in advance for the terrible pictures. I had an idea of what I wanted to do, so I came home with a fleece baby blanket and a long thick fleece scarf from the thrift store yesterday. 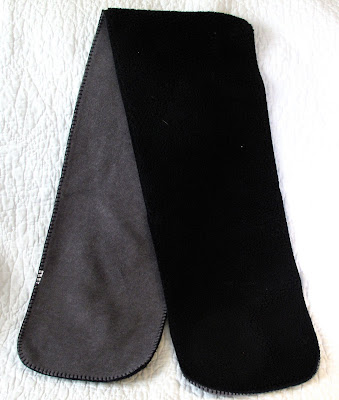 I cut 2 circles out of wool blanket pieces I had, and Spots needed some spots on her bed, so my son picked out the scraps to become the spots. The bed IS perfectly round, the pictures were just bad. 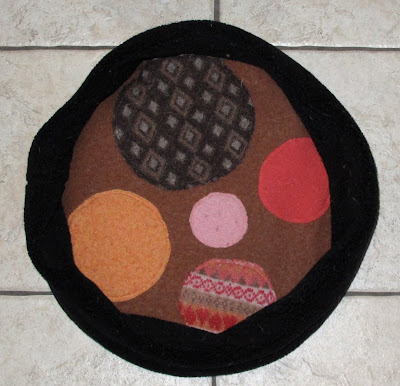 I folded over the width of the scarf and that became the sides of the bed. I sewed the 2 circle pieces to the scarf, but I left a 10" opening between the 2 wool layers, so I could slip the folded fleece baby blanket in for padding. I thought I would have to use buttons or something to keep the gap closed, but you can't see it when it's on the floor, so I left it alone. She's standing on one edge of it, tipping up the end with the gap. That's why you can see it so well in the pic. 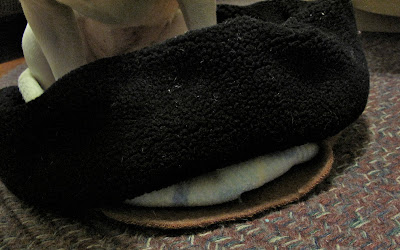 I know it looks really small, but when I lay out a big blanket, she scoots it around into a nest & curls up into a tiny ball. She sleeps in that position, so I thought she'd like a tiny nest like this, and I was right. I had a really hard time taking a picture of the finished bed without her in it! She loves it :) I plan to make another, so she has one in the bedroom, and one in the family room. 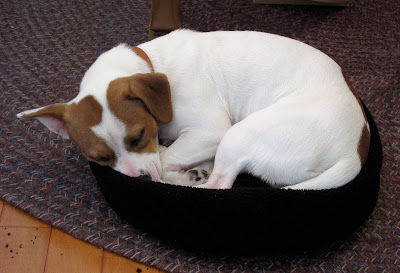 Posted by Resweater at 4:11 AM

I'm new to your blog, but I love all the uses you've found for recycled wool. What a sweetheart she is! Our black lab (also adopted from a shelter) is in need of a new bed, so I might just have to do some sweater shopping of my own soon. Nicely done!

Welcome to my blog, Anna! Wool is great for pets, since it does not hold on to dirt & odors as much as other materials do, and it's insulated.

so cool...you are so talented...you are truly an inspiration....love Spots and her new bed!

What a pretty and cozy looking bed. congrats on the dog. She looks like she's right where she belongs.

An awesome bed! I have tried to make my dog beds in the past, but he never seems to like them. Maybe I have been making them to big...

oh my gosh kris!
that is the most wonderful dog bed ever!
she loves it!
what a lucky puppy!
xoxoxo
m